Toddler age is a golden period for the development and growth of the baby's brain which is commonly referred to as the golden period, especially the first 1000 days. Behind the importance of maintaining the growth and development of infants, there is a failure to grow in the form of short height for age due to chronic malnutrition called stunting. The province of West Nusa Tenggara (NTB) has a higher prevalence of stunting than the province of Bali as the closest province to NTB, which is 33.5%, while the province of Bali is 21.9%. Stunting is caused by various factors including maternal education, sanitation, access to health care facilities, and infection. This study aims to determine the risk factors for stunting in the province of NTB. This study uses secondary data from Riskesdas for the province of NTB in 2018 obtained from the Health Research and Development Agency (Balitbangkes) of the Indonesian Ministry of Health with an analysis unit for children aged 0-59 months in the province of NTB. Data were analyzed by univariate, bivariate and multivariate with the help of SPSS 25.0 program. Bivariate test using Chi-square test and multivariate test using logistic regression. This study found that children under five in the province of NTB had a normal nutritional status of 71.2%. There were no differences in the nutritional status of the respondents according to the characteristics of the children, either history of illness or gender, there were significant differences in the nutritional status of the respondents according to the mother's education and the number of household members, and there were no differences in the nutritional status of the respondents according to the environment. It is hoped that the NTB provincial government, the NTB Provincial Health Office, the NTB provincial BKKBN, and the local district/city government can synergize with each other in implementing the stunting toddler intervention program, especially for mothers with low and middle education. 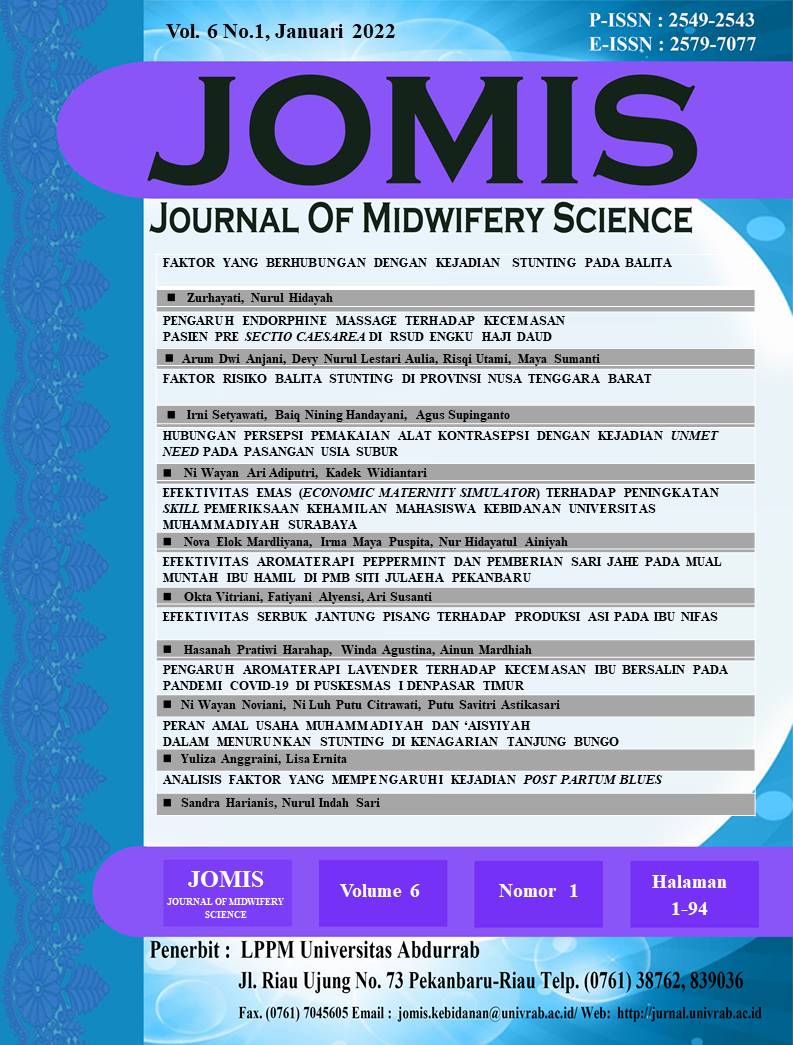 1. Copyright of all journal manuscripts is held by the JOMIS : Journal of midwifery scinece

2. Formal legal provisions to access digital articles of electronic journal are subject to the provision of the Creative Commons Attribution-ShareAlike license (CC BY-NC-SA), which means that JOMIS : Journal of midwifery scinece  is rightful to keep, transfer media/format, manage in the form of databases, maintain, and publish articles.